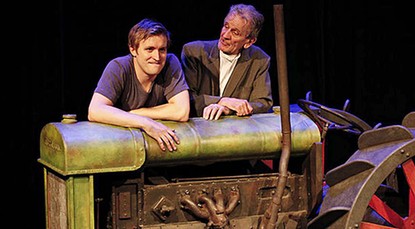 War Horse sequel riding high in New York thanks to US love of nature, by Tom Teodorczuk

Farm Boy, first staged in Edinburgh in August last year by touring company New Perspectives, is playing to packed houses at off-Broadway venue 59E59 Theaters in New York’s Upper East Side, not far from where the Tony-award winning New York production of War Horse is being staged. War Horse is still also playing to packed houses in London’s West End.

Farm Boy is the most successful new family show to open during New York’s competitive Christmas season. The reason for its success, Morpurgo said, was that people in the US have “more respect” for rural life and value England’s rolling hills more highly than us.

Like War Horse, Farm Boy has been adapted for the stage from a book by the bestselling children’s author, and depicts what happens to Joey, the War Horse star foal, after the First World War.
English actors John Walters and Richard Pryal have reprised their roles in New York along with director Daniel Buckroyd.

Morpurgo told the Standard he was thrilled with Farm Boy’s New York success, which coincides with both War Horse on Broadway and the release of Steven Spielberg’s film, which is being tipped for Oscars. He said: “I’m a lucky man – to have two shows in New York at the same time doesn’t happen twice in a lifetime.”

But he attributed the Stateside success of Farm Boy to the fact that the US is more appreciative of its Devon rural settings than England: “In America the connection to the countryside is very strong. Rural life here is now thought to be antique and nostalgic but in America there’s a nobility to it.” While War Horse boasts a cast of more than 30, Farm Boy has a cast of two. But its modest production values have won over US critics.

Showbusiness bible Variety declared: “It’s enough to move an audience to tears,” while Time Out New York raved: “Farm Boy revels in the power of a tale well told.”

Plans to bring Farm Boy to London for an extended run next year are ongoing although negotiations for it to be staged at the Trafalgar Studios have fallen through.