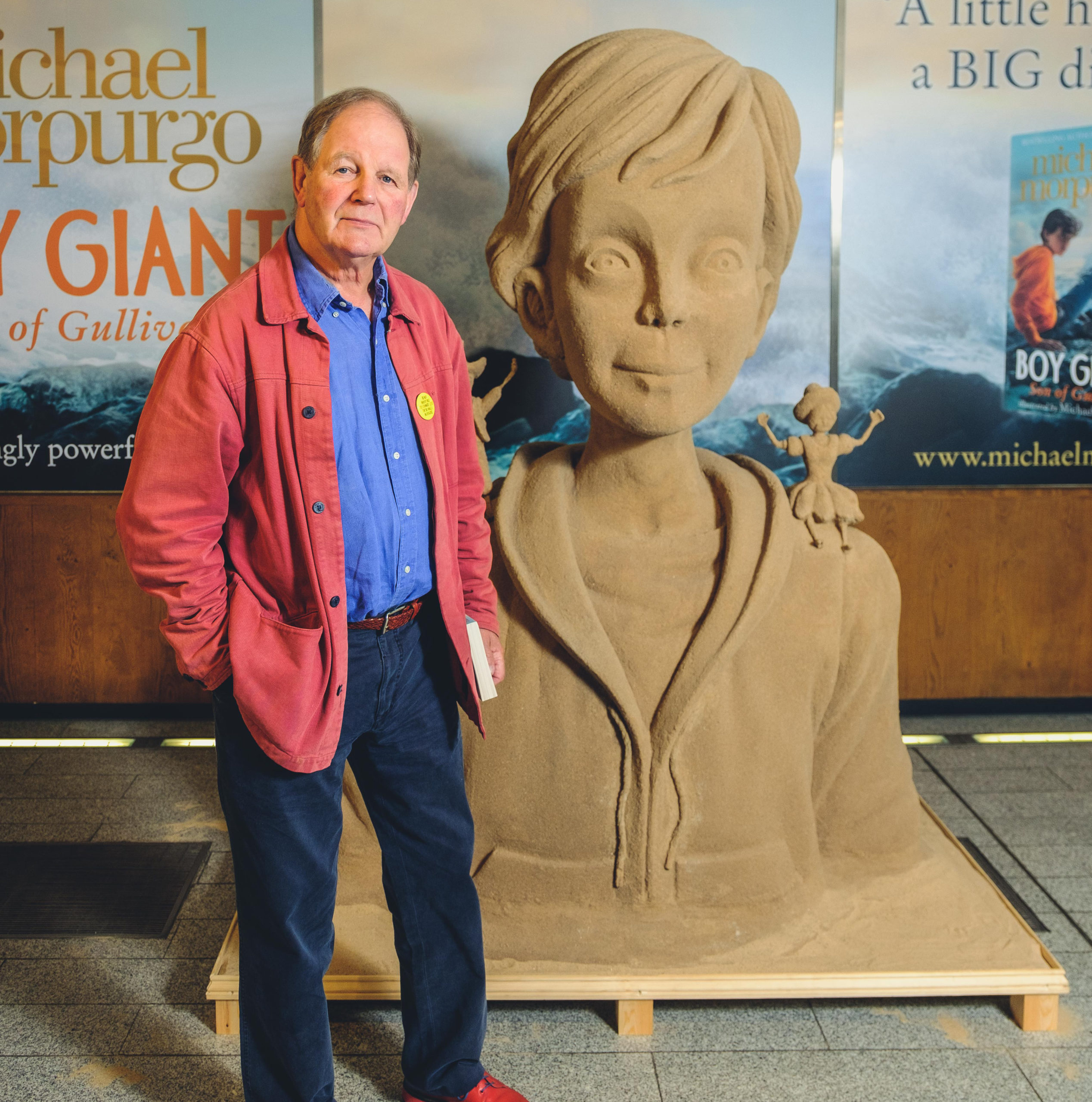 Much ado about... me

I was born a really long time ago. 5th October 1943. In St Alban’s in Hertfordshire. My mother was there too, strangely enough, but my father was away at the war, in Baghdad. I had one older brother, Pieter. We both were evacuated to Northumberland when we were little, away from the bombs. After the war it was all change at home, not that I remember much of it. My mother wanted to be with a man she had met while my father was away in the army. He was called Jack Morpurgo. So my father came home to find there was no place for him. There was a divorce. Jack Morpurgo married my mother, and so became our stepfather. We lived in London then. We went to primary school at St Matthias in the Warwick Road, then were sent off to boarding school in Sussex – the Abbey, Ashurst Wood. I was there for six years, hated being away from home, loved rugby and singing. Then I went off to a school in Canterbury, The King’s School, where I got more used to being away from home and still loved rugby and singing. We wore strange uniforms, wing collars, black jackets, boaters. And when I was older I got to wear a scarlet gown which made me feel very important. Read more

I saw the first swallows gathering on the telephone wire, waiting in the airport for their flight home, many of them born in our garage as usual. I used to feel sad to see them go. I’m less so now. More than ever in my life I live happily in harmony and in rhythm with the seasons. I think it’s because I have stayed at home for almost 18 months, seen the seasons come and go, on my walks, through the window. I have had time to stand and stare. I live much more in the present, much more connected to the countryside and nature. I’m living in it, part of it not merely an observer.

The swallows will be back. All is well. All will be well.

The city children, who come with their schools to Nethercott Farm with the charity my wife Clare began nearly 50 years ago, are back, after 18 months. We see them again out in the field with the sheep, chasing leaves, stamping in puddles, hear their laughter again on the wind. Like the swallows they came back. So good to have them.

Next year will see the publication of 10 farm stories, (HarperCollins) every one of them about a child who has spent a week out in countryside, a week a world away, at either Nethercott or Treginnis or Wick, stories often inspired by true happenings on the farms. There’s one already published brilliantly illustrated by Sam Usher. The Birthday Duck. Have a read.

But this autumn has brought new life to schools and families and the world of books. The bookshops are open, libraries are open, schools are open. And during the shut down time, such a difficult time for so many, I have been beavering away at my writing. It kept me busy which kept me from being too sad.

I hope you may have seen my first book that was made during those sad times, because of those sad times. Song of Gladness (Macmillan).  A blackbird singing to me gave me the idea to write that. Then I met a fish, a flying fish on the island of Ithaca, in Greece, the first I’d ever seen, and I had to write a story in the voice of a flying fish, because that fish spoke. No I mean it, that fish spoke. If you don’t believe me, read the story – When Fishes Flew (Harper Collins) – which has just come out. There are amazing drawings in the book by George Butler. You have to see them.

I think I was in the groove somehow of writing with the voice of a fellow creature, of seeing the world not through my eyes, but theirs. I could do it. I’d just been a fish-writer, and I’d been a horse-writer a long time ago when I wrote War Horse. I rather liked not using my own voice. So I went and wrote over 30 poems and with my old friend and phenomenal illustrator Michael Foreman, we made a lovely book of poems together, called Carnival of Animals (Harper ollins) – out in November. We thought we would weave some of the poems into a new version of Carnival of the Animals by the composer, Saint-Saens which we recorded with Decca, then performed at the BBC Proms. I was a Tortoise one moment and a Lion next in front of 5000 people. Scary if you’re just me, but if you’re a Lion or a Tortoise, no problem!

And then my friends at my publishers, Harper Collins, thought they would like to celebrate 25 years of one of my favourite books, Butterfly Lion. So they are bringing out a glorious full colour edition in November. And the wonderful thing is that the two people who made the original book, my editor Ann-Janine Murtagh, and Christian Birmingham have got together to make this new anniversary edition, and it Is so beautiful. One of those books you treasure, have to pick up, to stroke, to look at and read again and again.

Oh yes, and don’t forget to have a look at the paperback of The Puffin Keeper, (Puffin Books) with amazing illustrations by Benji Davies, set on the Scilly Isles, in a lighthouse, a book full of puffins and paintings, of a shipwreck, and more puffins!

And you must come along to our concerts if we do one near you, a Christmas one in Canterbury Cathedral on December 4, of On Angel Wings, and very soon three concerts of Carnival of Animals, in Henley, in Ely Cathedral, in Oxford at the Sheldonian. A tapestry of music and poems.

Please contact Michael Morpurgo via his social media channels. However, for other enquiries, please contact the following people:

Michael and his wife Clare founded Farms for City Children in 1976 at Nethercott Farm, deep in Devon river country, and Michael has called the project his ‘greatest story’. The charity now operates three working farms: Treginnis Isaf on the Pembrokeshire coast opened twenty years ago and Wick Court in Gloucestershire opened in 1997. They aim to expand the horizons of children from towns and cities all over the country by offering them a week in the countryside living together on one of their farms. The charity has inspired many of Michael’s books, including one special visit that planted the seed that would later become War Horse. Over the years the formula has changed very little. Simply, children are involved in everything necessary to keep the farms going. They learn hands-on where their food comes from, the importance of caring for animals and the land, and the value of working co-operatively as a team. The rewards are, unusually, non-material and self-generated: children discover an active enjoyment in life and a sense of achievement, the effects of which remain with them long after they have waved the farms goodbye. Farms for City Children is a UK registered charity. To find out more about how you can help the children to get the most out of their experience please visit farmsforcitychildren.org. Visit Farms for City Children