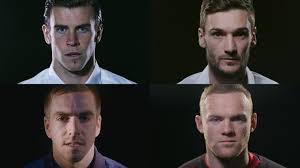 UEFA marks the 1914 Christmas truce in a powerful film

Wayne Rooney, Philipp Lahm, Hugo Lloris, Bastian Schweinsteiger and Gareth Bale tell the story of the 1914 Christmas truce in the words of the men on the front line in a powerful UEFA film scripted by Michael Morpurgo.

The four-minute clip brings to life the extraordinary events in Flanders 100 years ago, when, on a cold December evening, soldiers on both sides of the battle lines lowered their arms, started singing Christmas carols and – significantly – played football together.