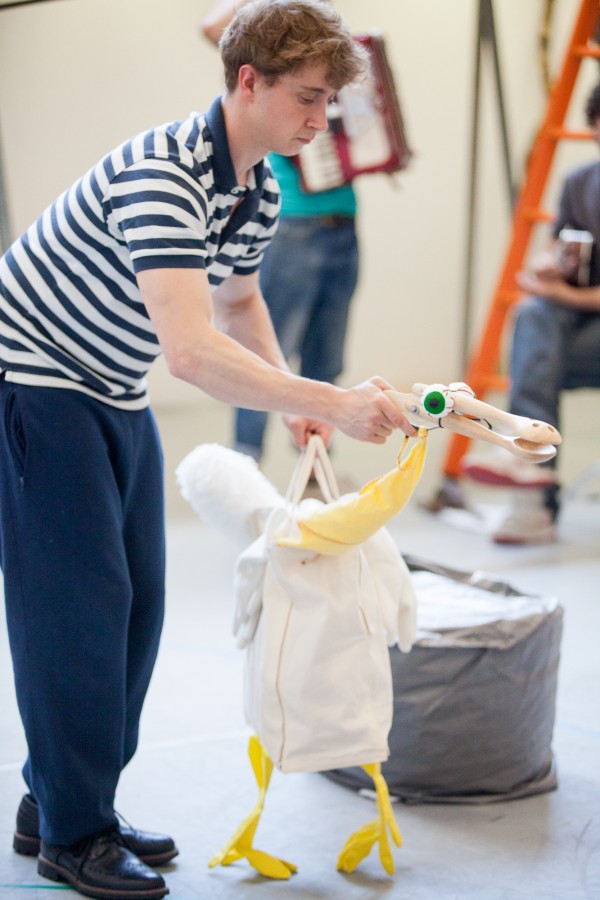 The Boy Who Cried Wolf! ..and other stories from Michael Morpurgo’s Aesop’s Fables

One of the hardest parts of making this show was choosing which of the stories to tell. Apparently, Aesop told over 650, of which – thankfully – Michael Morpurgo has whittled them down to twenty one for his collection which we used as our main resource.

Michael has enriched the stories with a big dollop of humanity and humour – making them much more accessible than some of the traditional versions. We’ve included firm favourites such as The Hare and the Tortoise but added a few lesser known stories such as The Rat and the Elephant and Belling the Cat – which isn’t the name of the cat by the way, ‘Belling’ is a verb.

Although attributed to Aesop, a Greek slave, no-one knows exactly where the stories
Originate although it’s most certainly via the oral tradition, passed down from storyteller to storyteller, so that there are, in fact, hundreds of versions of the same story circulating the globe. As a director, a big part of the pleasure in telling these stories is to appropriate them, take the essence of the story and moral and make it our own. Passing on the stories with our original take on them is an important part of the process. The attitude of the storyteller to the story he or she is telling affects the way the audience perceive it – is it being told to warn, make laugh, advise or comfort? The morals, so associated with Aesop, are intrinsic to the stories, and we had a lot of fun discovering the best way to deliver them – we didn’t want to come across as too didactic or preachy but essentially, that is what they are there to do!

It’s good to remember that the stories were originally intended for adults, it wasn’t until the eighteenth century that they became popular as children’s fables. We’ve devised the show specifically for a family audience so that all ages can enjoy it.

When you’re working outside, you need performers with strong personalities and constitutions to be able to deal with whatever the weather throws at you. There is a completely different atmosphere when you go to see an outdoor show – it is much less formal than being inside a theatre and because the audience are clearly visible, the relationship between audience and performer is heightened. Audiences want to have a good time at an outdoor show, be entertained and share a bit of a romp with the cast. I really hope we achieve this.

Bring your waterproofs and enjoy!

It is an enormous honour and of great personal excitement to welcome the master storyteller Michael Morpurgo back to Bristol Old Vic.

Michael has been a huge inspiration to me, as to so many, not only through the timeless storytelling power of War Horse, but through the brilliant human portraits of Private Peaceful, the vividly imagined world of Kensuke’s Kingdom and pure good-hearted passion of The Kites Are Flying!