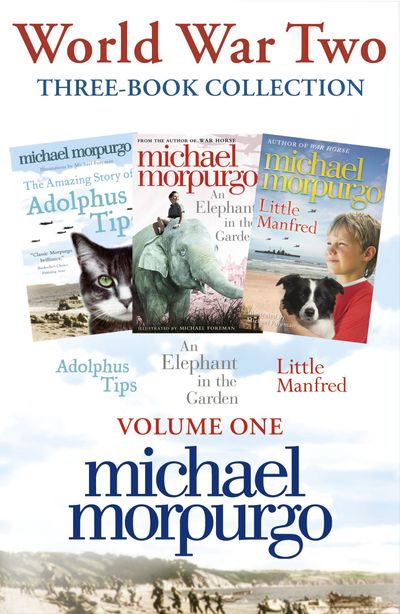 All three stories are illustrated by the hugely talented and award-winning, Michael Foreman.

THE AMAZING STORY OF ADOLPHUS TIPS: It’s 1943, and Lily lives on a farm, in the idyllic seaside village of Slapton. Apart from her father being away, and the ‘townie’ evacuees at school, her life is scarcely touched by the war. Until one day, Lily and her family, along with 3000 other villagers, are told to move out of their homes – lock, stock and barrel.

Soon, the whole area is out of bounds, as the Allied forces practise their landings for D-day, preparing to invade France. But Tips, Lily’s adored cat, has other ideas and returns to the forbidden area. Frantic to find her, Lily decides to enter the danger zone herself…

AN ELEPHANT IN THE GARDEN: It’s 1945. Elizabeth’s father is fighting with the German army on the eastern front. Her mother works at Dresden zoo, where her favourite animal is a young elephant named Marlene. When the zoo director tells her the dangerous animals must be shot to prevent them running amok when the town is bombed, Elizabeth’s mother moves Marlene into the back garden to save her… and then the bombs start to fall.

Their home destroyed, Elizabeth and her family must flee the bombed-out city and through the wintery landscape, all the while avoiding the Russian troops who are drawing ever closer. It would be hard enough, without an elephant in tow…

LITTLE MANFRED: It is the summer of 1966, and Charley and her little brother, Alex, are walking their dog Manfred on the beach when they notice two old men, staring out to sea. A chance encounter brings them together and slowly Charley and Alex learn of their mother’s past.

For in 1945 , their farmstead home was a posting for German prisoners of war and their mother Grace was just a little girl…

Author: Michael Morpurgo
Format: eBook
Ageband: From 9
Release Date: 10/09/2015
ISBN: 978-0-00-816449-2
Michael Morpurgo OBE is one of Britain's best-loved writers for children, and has sold more than 35 million books around the world. He has written more than 150 novels and won many prizes, including the Smarties Prize, the Whitbread Award and the Blue Peter Book Award, while several of his books have been adapted for stage and screen, including the global theatrical phenomenon War Horse. Michael was Children’s Laureate from 2003 to 2005, and founded the charity Farms for City Children with his wife, Clare. He was knighted in 2018 for services to literature and charity.

All three stories are illustrated by the hugely talented and award-winning, Michael Foreman.