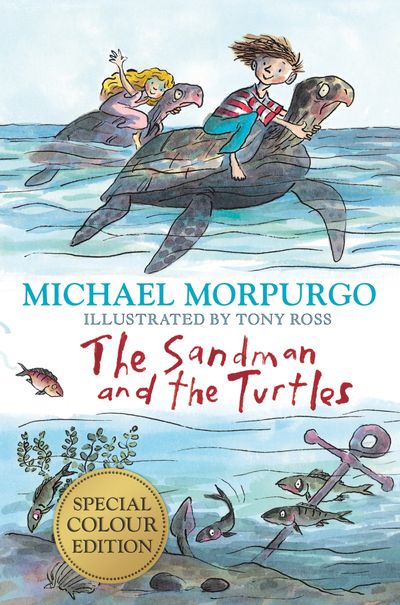 The Sandman and the Turtles

Michael loves his grandfather’s stories about the Sandman and the turtles, but he doesn’t believe that they are real. But that’s about to change, because the Sandman is very real indeed … and Michael and his cousins Barry and Polly are going to need his help.

The Sandman and the Turtles is a charming adventure from former Children’s Laureate Michael Morpurgo, the master storyteller behind An Eagle in the Snow, Listen to the Moon, Private Peaceful, and An Elephant in the Garden. Michael has written more than one hundred books for children and won the Whitbread Award, the Smarties Award, the Circle of Gold Award, the Children’s Book Award and has been short-listed for the Carnegie Medal four times.

Tony Ross is one of Britain’s best known illustrators. He has worked on the bestselling ‘Little Princess’ and ‘Horrid Henry’ stories, David Walliams’ Gangsta Granny and many, many more. He lives in Wales.

Author: Michael Morpurgo
Format: Paperback
Ageband: 7 to 10
Release Date: 04/03/2013
Pages: 96
ISBN: 978-1-4052-6383-2
Michael Morpurgo OBE is one of Britain's best loved writers for children, with sales of over 35 million copies. He has written over 150 books, has served as Children’s Laureate, and has won many prizes, including the Smarties Prize, the Writers Guild Award, the Whitbread Award, the Blue Peter Book Award and the Eleanor Farjeon Lifetime Achievement Award. With his wife, Clare, he is the co-founder of Farms for City Children. Michael was knighted in 2018 for services to literature and charity.

The Sandman and the Turtles