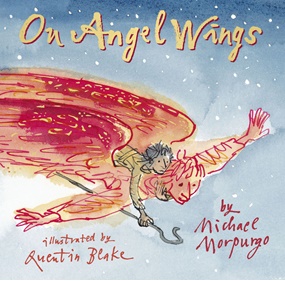 Michael Morpurgo and actor Nandi Bhebhe narrate his book On Angel Wings, a magical retelling of the Christmas story, accompanied by Voices at the Door singing traditional Christmas carols. The performance is directed by Simon Reade.

This magical concert is based around Michael Morpurgo’s book On Angel Wings, which tells the Christmas story through the eyes of a young shepherd boy.

Christmas carols are performed by Voices at the Door. Their a cappella harmonies have won them awards and sell-out tours in the UK and Europe.

This special concert performance of On Angel Wings is in aid of Farms for City Children, the charity founded 40 years ago by Clare and Michael Morpurgo that enables children and their teachers to become farmers for a week on one of it farms in Devon, Gloucestershire and Wales. Every year Farms for City Children need to raise a million pounds to support disadvantaged children and the three historic buildings where they come to stay.