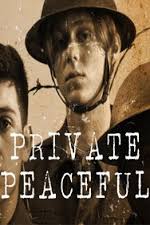 A century on from the First World War, National Youth Theatre stage a stunning adaptation of Private Peaceful, based on the best-selling novel by Michael Morpurgo.

Inspired by the many soldiers court-martialled and shot for cowardice during the Great War, this is Simon Reade’s rarely-performed ensemble version of the award-winning book. This compelling love story and touching account of the First World War is not to be missed!

Michael Morpurgo drops into rehearsals at the Ambassador Theatre.

Book exclusive £15 tickets to see Private Peaceful during its October run by using code HARPERCOLLINS online at www.nyt.org.uk or by calling 08448 112334.