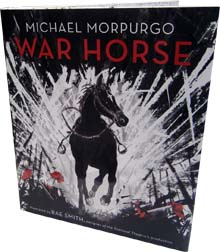 First published in 1982 War Horse has become an international phenomenon. War Horse, first performed at The National Theatre in 2007 is the moving and inspiring story of Joey, the Devon farm-horse who travels to the Front and witnesses war on both sides. The production has won numerous accolades including five Tony Awards in 2011. In Spring 2014 the production welcomed its 5 millionth audience member worldwide, and recently opening in Berlin and Amsterdam.

Theatre designer Rae Smith is the artistic mastermind who brought this story to life on stage, and for which she won The Tony Award and Olivier Award. The exhibition will feature Rae’s original theatre, costume and scenic artwork – all of which were displayed on stage at The National Theatre. On show will be a selection of equine drawings of the horse puppets so vividly created by Handspring Puppet Company, as well as powerful Vorticist-inspired depictions of battle-torn France, and an exclusive War Horse Panorama, an incredible 24 m concertina drawing (as a limited edition print) made by Rae to celebrate the worldwide tour of War Horse and commemorate WW1 Centenary.

Find out more at www.illustrationcupbaord.com