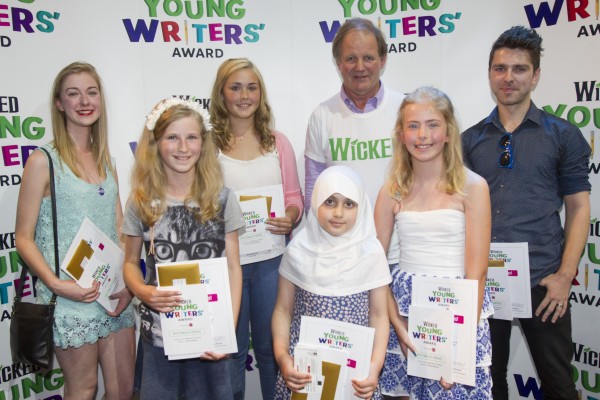 The Wicked Young Writers’ Award announced its winners for 2014 at a prestigious ceremony at the Apollo Victoria Theatre, home of the award-winning musical WICKED.

The Award judges chose the winners from over 5000 entries from individuals and schools across the country, revealing a wide range of different voices and themes, including bullying, love, dementia and memory loss and the traumatic effects of war.

The ceremony was co-hosted by Savannah Stevenson who stars as Glinda and Katie Rowley Jones who stars as Nessarose, and prizes were presented by Michael Morpurgo, best-selling author of War Horse and Chair Judge of the Award. The Award’s judges, Michael McCabe, Executive Producer of Wicked, and performance poet and writer Dean Atta, also attended the ceremony. HRH The Duchess of Cornwall is Patron of the Award.

“All these talented young writers have allowed their imagination to live and breathe. They haven’t been afraid to tell their stories and speak their poems down and to express themselves with originality and flair.”

The long-running West End show launched the Award in 2010 to recognise excellence in writing, encourage creativity and help develop writing talent in young people between 5 and 25 years of age from across all backgrounds and areas of the UK.

“We’ve been inspired and excited by the creative skills and extraordinary pieces that we’ve received this year. Congratulations to our 2014 winners, and we now look forward to encouraging even more young people across the country to express themselves through writing.”

The Wicked Young Writers’ Award has also been working with the National Literacy Trust for two years on a programme of joint events at literary festivals and conferences to highlight both reading and writing skills amongst young people.