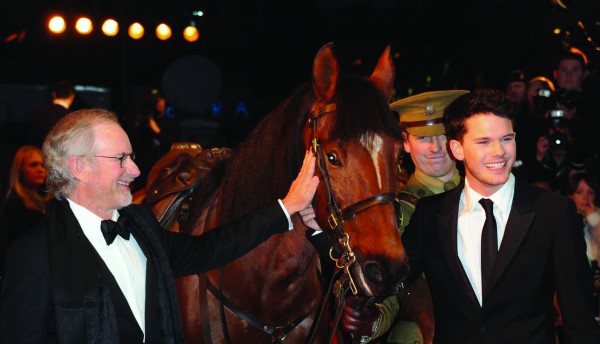 War Horse gallops away at the UK Box Office in the No.1 slot with £3.9million

Steven Spielberg’s War Horse has had a stellar opening weekend at the UK box office, stealing the hearts of Great Britain and galloping in at No1, with a weekend total of £3.9million.

This stunning British adaption of Michael Morpurgo’s much loved children’s book, achieved a huge screen average of £7,800, as the UK’s moviegoers flocked to see Spielberg’s sweeping epic interpretation of the War Horse story, set in Devon and shot entirely on location in the UK. “This is my first British movie, through and through,” said Spielberg whilst in London for the royal premiere last weekend.

“A triumph,” Mail on Sunday, Matthew Bond “This is filmmaking on a grand scale, bound by a grand vision, bolstered by grand performances and swept along by a grand old John Williams soundtrack,” Daily Telegraph, Robbie Collins

“this serves as a reminder of why Spielberg is considered one of the great visionary storytellers,” The Sun, Alex Zane

DreamWorks Pictures’ “War Horse”, director Steven Spielberg’s epic adventure, is a tale of loyalty, hope and tenacity set against a sweeping canvas of rural England and Europe during the First World War. “War Horse” begins with the remarkable friendship between a horse named Joey and a young man called Albert, who tames and trains him. When they are forcefully parted, the film follows the extraordinary journey of the horse as he moves through the war, changing and inspiring the lives of all those he meets — British cavalry, German soldiers, and a French farmer and his granddaughter — before the story reaches its emotional climax in the heart of No Man’s Land.

The First World War is experienced through the journey of this horse — an odyssey of joy and sorrow, passionate friendship and high adventure. “War Horse” is one of the great stories of friendship and war — a successful book by Michael Morpurgo, it was turned into a hugely successful international theatrical hit that originated at London’s National Theatre – it is currently showing at London’s New London Theatre and on Broadway. It now comes to the screen in an epic adaptation by one of the great directors in film history.