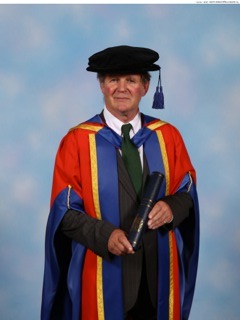 Famous literary author Michael Morpurgo has been awarded an Honorary Doctorate from the University of Northampton. Presented by Dr Charles Bennett, Senior Lecturer in Creative Writing, Michael recieved the award at the Royal & Derngate and left the crowd in awe as he broke into song! Speaking about his honorary doctorate in Northampton he said:

“This is the town of Walter Tull who was a great footballer for your football club. He is a man I hugely admire, I admire his courage and he was welcomed by this town and I think he was taken into their hearts as a man more than a footballer. He died in the First World War and was a great man of courage. I identify Northampton with him and shoes on my feet because I love buying shoes that are made in Northampton. They are a bit expensive which is why I have to keep writing books.”

Steve Taylor, Deputy Dean for the School of the arts at the University of Northampton commented:

“The Honorary Awards are given to influential men and women who have inspired others through the work they have done, Michael has done just that. His stories and charity work have helped children and adults alike.”

Michael began writing his stories in the early 1970s, he now travels internationally talking to children, telling his stories and encouraging them to tell theirs. As one of the UK’s best-loved authors and storytellers he was appointed Children’s Laureate in 2003. He has written more than 120 books including War Horse, which was adapted for the stage by the National Theatre and in 2011 for film by Steven Spielberg.