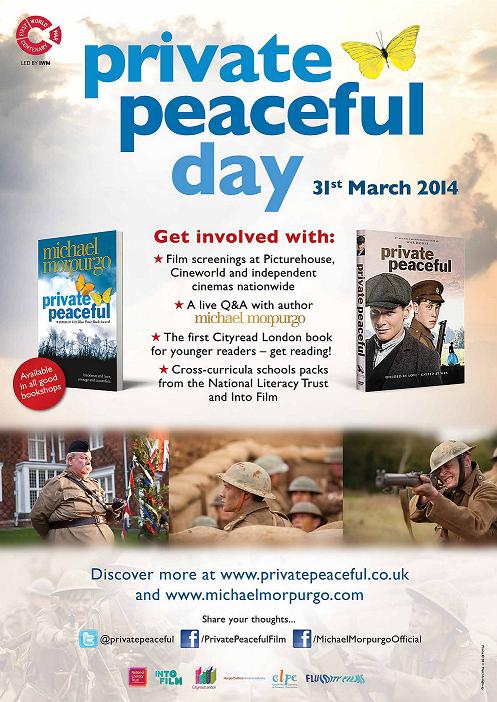 Michael Morpurgo launches Private Peaceful Day on Monday 31 March with a live Q&A via satellite from . In a major screening event for schools, 100 cinemas including Picturehouse and Cineworld, will show the film across the UK as part of the Centenary commemorations of WW1. 7,500 children will attend a special screening of Private Peaceful and watch Michael answer questions live about Private Peaceful after the screening.

Each pupil will receive a free copy of A Medal for Leroy donated by HarperCollins Children’s Books, who have worked with Fluidity Films, Picture House Cinemas, Cityread London and The Reading Agency to ensure that schools and libraries across the country are involved in the day and the commemoration of the 100th anniversary of the start of World War One.

Each April, Cityread asks London’s citizens, workers and visitors across all 33 boroughs to pick up a book – the same book – and read it together. Private Peaceful Day marks the start of Cityread London which will run throughout the entire month of April with events in every London borough. It was conceived to promote reading for pleasure, engage new library users and encourage people to explore and celebrate their city’s history.

This year, Private Peaceful has been selected as the first ever Cityread title for younger Londoners. A schedule of events is planned for April, including a Family Day Extravaganza at Museum of London Docklands on Saturday 5th April, Private Peaceful storytelling sessions from 2nd April and free comic workshops in London’s libraries throughout the month.

To coincide with Private Peaceful Day, The Reading Agency has produced a ‘Chatterpack’ of reading group activities and discussion ideas for use by libraries and in museums nationwide. Visit The Reading Agency website for further information.