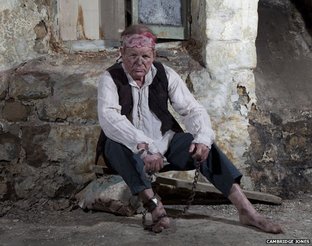 Michael Morpurgo dresses up as his favourite character

Photographer Cambridge Jones has collaborated with The Story Museum for its latest exhibition which celebrates childhood story heroes and sees well-known authors dress up as their favourite literary characters.

When the The Story Museum approached Cambridge Jones to take pictures for its 26 Characters exhibition, the photographer wanted images that visitors would actually stop and look at.

“Just taking a bunch of authors isn’t going to make people interested – and authors aren’t necessarily outgoing people,” he says. “So I thought what if we gave them permission to have fun by asking them who their favourite character from childhood was and let their imagination run free.”

With the help of costumes from the Royal Shakespeare Company and National Theatre, the resulting exhibit features 26 writers portraying a collection of rogues, rascals, witches and wild things.

Each one features in their own character-themed interactive space, accompanied with audio of the authors reading extracts from their books and interviewed about their chosen character.

Like several of our (male) authors, Michael was not an avid reader when young. He explained to Cambridge Jones that he found books quite hard work to get through and they lacked the appeal of playing in the outdoors with other kids.