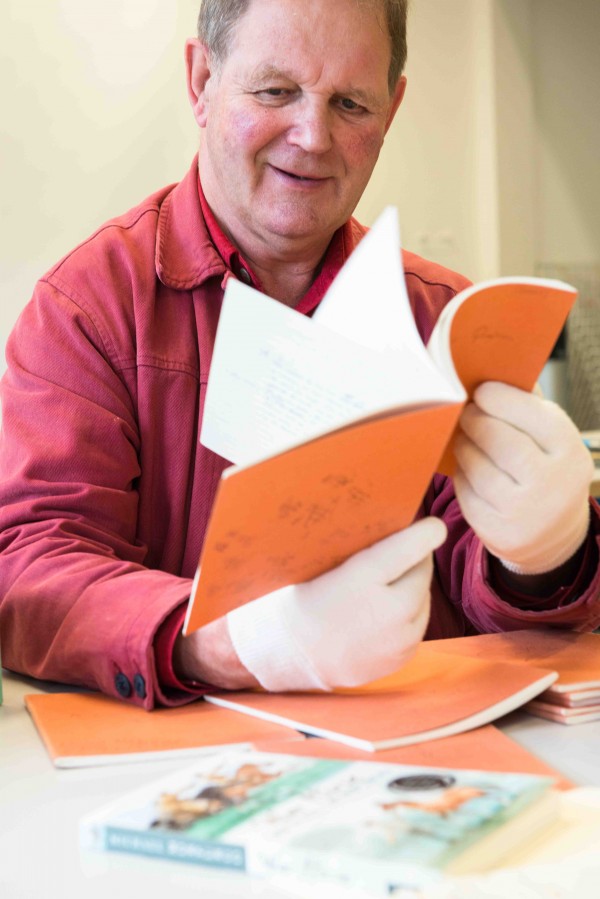 Seven Stories, The National Centre for Children’s Books, based in Newcastle upon Tyne, is honoured to be the custodian of Michael Morpurgo’s archive. The archive contains draft manuscripts, photographs, notebooks and related correspondence from his first publication It Never Rained (1974, Macmillan) to An Eagle in the Snow (2015, Harper Collins). Well known and loved works including War Horse (1982, Egmont), Private Peaceful (2003, Harper Collins), On Angel’s Wings (2006, Egmont) and Shadow (2010, Harper Collins) are represented.

Michael Morpurgo is one of Britain’s greatest living authors for children. His work spans 40 years and a career that has seen the publication of over 150 books for children, traversing wide-ranging topics that explore historical events, natural history and the environment, adventure and family life. Morpurgo is a true champion of children and young people’s culture, creativity and their right to read and enjoy stories. He was instrumental in setting up the Children’s Laureateship in 1997, and his services to children’s literature were recognised in 2006 when he was awarded an OBE.

“I have known Seven Stories for a number of years and admired the way that it has worked quietly and diligently to fill an obvious gap in our culture by founding a National children’s literature archive and by using it to make amazing exhibitions” says Michael Morpurgo, explaining his reason for the donation. “Seven Stories is a most extraordinary achievement for the country and for Newcastle. It is our National Centre for Children’s Books created for the enjoyment and inspiration of children and adults, and it does this by embracing the whole children’s book world. It made sense to us that it should be the home for my stuff”.
Kate Edwards, Seven Stories Chief Executive added,

“We were honoured and humbled when Michael said that he would like Seven Stories to be custodian of his archive. Our museum’s mission is to save, celebrate and share Britain’s rich and wonderful literary heritage for children. This archive will be treasured, studied, showcased and enjoyed for many generations to come, giving a real and fascinating insight into the creative life of this important and well-loved author.”
Highlights from the Michael Morpurgo archive include:

• Material relating to the adaptation of War Horse (1982, Egmont) from book to stage to screen, including early drafts of a film adaptation from the 1990s

• Research notes and drafts of Morpurgo’s many talks and lectures including his iconic Dimbleby lecture, ‘Set our Children Free’ (2011)

• Typewritten manuscripts from Ted Hughes of the poems he wrote for All Around the Year (1979, John Murray Publishers), an early collaboration with Morpurgo

The Michael Morpurgo archive contains a lot of material relating to adaptations, in particular War Horse, first published in 1982 by Egmont. It was first performed at the National Theatre in London in 2007; it is still enjoying a record breaking run, ending March 2016. It has been made into a blockbusting film by Steven Spielberg and the stage production has been enjoyed by over 6 million people worldwide.

“I knew it would be something special but I didn’t realise how special,” says Michael on first seeing the adaptation of War Horse at the National Theatre, “I was there on the opening night and there wasn’t a dry eye in the house and everyone was on their feet. It was the start of something special.”
Seven Stories will draw upon Michael’s extensive archive to make brand new exhibition that will open at their museum in Newcastle on 1st July 2016. A national tour will follow. The exhibition will explore Morpurgo’s storytelling and will celebrate the impact of his poignant tales on a nation of young readers. It is being supported through a new Knowledge Transfer Partnership (KTP) between Seven Stories and Newcastle University’s School of English Literature, Language and Linguistics. The KTP is believed to be the first of its kind between a university English department and an external organisation, and is being funded by InnovateUK and the Arts & Humanities Research Council (AHRC).

Seven Stories was able to support the acquisition from Michael Morpurgo through support from Heritage Lottery Fund’s ‘Collecting Cultures’ programme, which has been awarded to Seven Stories in recognition of the museum’s national role in telling a comprehensive story of modern British children’s literature.