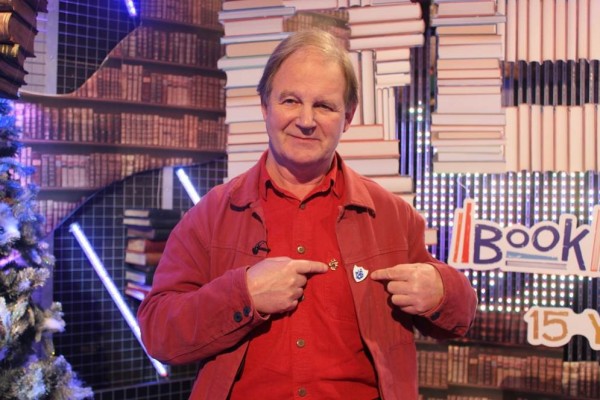 Today Michael Morpurgo appeared live on Blue Peter to announce the Blue Peter Book Awards Shortlist where he was also presented with the CBBC show’s highest accolade, the gold Blue Peter badge, for inspiring millions of children with his books.

Michael Morpurgo said of the accolade:

“Since I’ve spent a great deal of my life, first as a child, then father and grandfather, and as a teacher and finally as someone writing stories for children, it is the highest honour and greatest pleasure to be awarded a Gold Blue Peter Badge by the most iconic children’s programme in the country, a programme that has always had the interest, talent, creativity and welfare of children at its heart. It is good to be at the heart of all that with those children and with Blue Peter. I shall wear it with pride.”

The Blue Peter Book Awards, which are celebrating their 15th year, are special as they ask children to choose the winners. Approximately 200 children from 10 schools across the UK will read the shortlisted books and vote for their favourites in each category. The two winning books will be announced on the Blue Peter programme scheduled for World Book Day on 5 March 2015.

Click here to view the episode on BBC iPlayer and stay up-to-date with the Awards on Twitter: @Booktrust and #BPBA