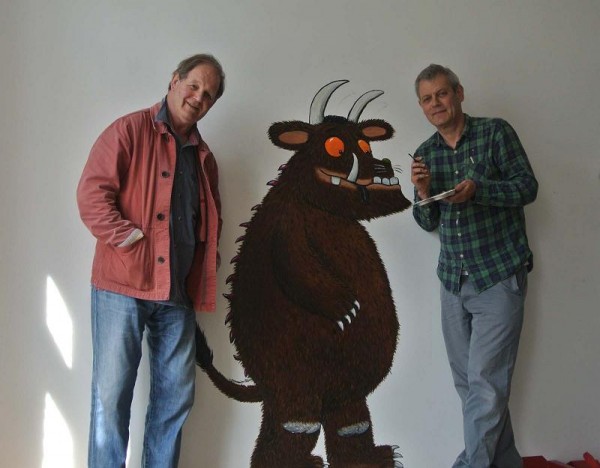 The biggest Gruffalo in the world

Gruffalo illustrator Axel Scheffler completed the biggest Gruffalo of all time on the wall of a west London school library which Michael Morpurgo opened last year.

The Gruffalo drawing was a part of a larger mural that also featured Mouse, Owl and Fox. The mural was a gift purchased and donated to Brackenbury Primary School by War Horse author Michael Morpurgo which he purchased at a fundraising dinner for Booktrust hosted by Waterstones.

Michael Morpurgo visited the school yesterday to watch Axel Scheffler put the finishing touches on a mural of the whole Gruffalo cast, which he had spent two days creating. Just before Axel finished drawing the last character, Mouse, he joined Michael Morpurgo for a quick chat with some of the pupils from the school.

Axel even commented that children came into the library in groups to watch him work and ask questions about his illustrations and The Gruffalo.