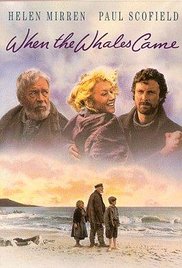 ‘When the Whales Came’ Film

The star-filled cast included Paul Scofield, David Threlfall and Helen Mirren. All of the cast and crew were shipped to Bryher, one of the Isles of Scilly, to record the film.

Maggie Fergusson, the writer of Michael’s biography War Child to War Horse, wrote this about the filming period:

‘It is a spring the older inhabitants of Bryher have never forgotten. For ten unseasonably cold weeks, the island was overrun with caterers, cameramen and make-up artists , not to mention troublesome fibreglass whales that had to be weighted down with rocks before they would swim beneath the surface of the sea.’

You can watch When the Whales Came  here!