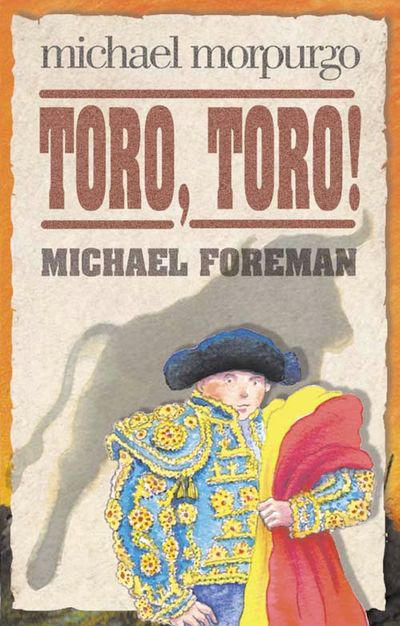 TORO,TORO is the story of a young boy growing up in Andalucia, Spain, on a farm rearing bulls for the bull ring. Antonito hand rears a little black calf and they become firm friends, but the boy doesn’t yet understand the fate of the black bulls – the corrida and death. Later, when he learns of the horrors of the bull fight, he frees Paco, the black bull, and rides with him into the hills.There they witness the bombing of their village (it’s the year 1936, and the Spanish Civil War has started) and Antonito cannot go back – his family and the farm are destroyed, and Paco has run off, wild with fright. He decides to stay in the hills, where he meets up with the Resistance fighters. During the War, Antonito hears stories round the campfire of the wonderful black bull, who becomes a symbol of freedom for them all. Could this really be Paco? But no-one has ever seen him. After the war, when Antonito is working as a muleteer in the mountains, he falls asleep and dreams of Paco. In the morning, he wakes to see hoof prints on the ground beside him…

A delightful story, full of nostalgia and drama in the author’s own inimitable style. Illustrated by Michael Foreman.

Author: Michael Morpurgo, Illustrated by Michael Foreman
Format: Hardback
Ageband: 9 to 11
Release Date: 01/10/2001
Pages: 128
ISBN: 978-0-00-710551-9
Michael Morpurgo OBE is one of Britain's best-loved writers for children, and has sold more than 35 million books around the world. He has written more than 150 novels and won many prizes, including the Smarties Prize, the Whitbread Award and the Blue Peter Book Award, while several of his books have been adapted for stage and screen, including the global theatrical phenomenon War Horse. Michael was Children’s Laureate from 2003 to 2005, and founded the charity Farms for City Children with his wife, Clare. He was knighted in 2018 for services to literature and charity.