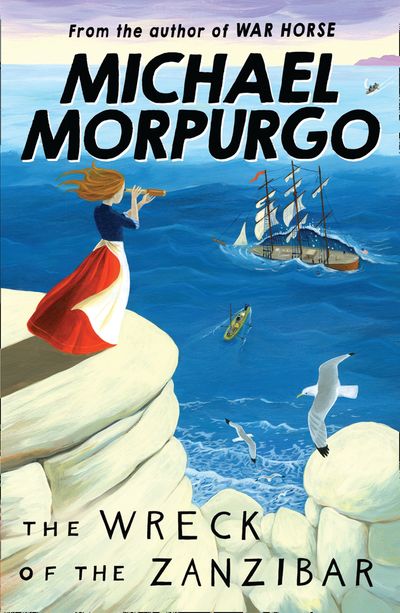 The Wreck of the Zanzibar

We all knew what was going to happen. We’d seen it before. A ship about to founder staggers before she falls. A huge wave broke over her stern and she did not come upright again. Life on the Scilly Isles in 1907 is bleak and full of hardship. Laura’s twin brother, Billy, disappears, and then a storm devastates everything. It seems there’s little hope. But then the Zanzibar is wrecked on the island’s rocks, and everything changes …

The Wreck of the Zanzibar is a gripping historical adventure from the author of An Eagle in the Snow, Listen to the Moon, Shadow, and An Elephant in the Garden.

Michael Morpurgo is the master storyteller of such modern classic children’s books as War Horse, Friend or Foe, Private Peaceful, and Kensuke’s Kingdom. He has written more than one hundred books for children and won the Whitbread Award, the Smarties Award, the Circle of Gold Award, the Children’s Book Award and has been short-listed for the Carnegie Medal four times.

Author: Michael Morpurgo
Format: eBook
Ageband: 10 to 13
Release Date: 03/10/2011
ISBN: 978-1-78031-142-5
Michael Morpurgo OBE is one of Britain's best loved writers for children, with sales of over 35 million copies. He has written over 150 books, has served as Children’s Laureate, and has won many prizes, including the Smarties Prize, the Writers Guild Award, the Whitbread Award, the Blue Peter Book Award and the Eleanor Farjeon Lifetime Achievement Award. With his wife, Clare, he is the co-founder of Farms for City Children. Michael was knighted in 2018 for services to literature and charity.

The Wreck of the Zanzibar