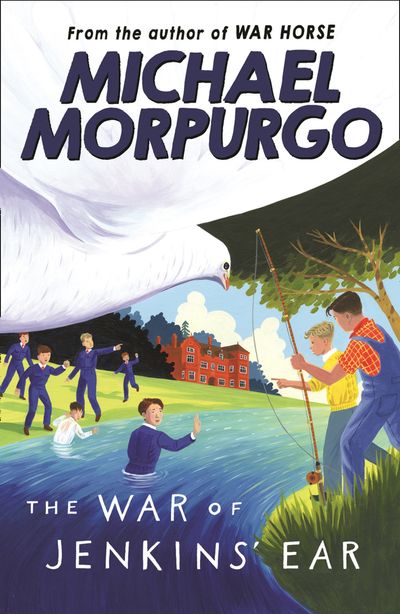 The War of Jenkins’ Ear

Toby Jenkins doesn’t like boarding school. He gets called Jinks and thinks he will never fit in. But then he meets a strange boy named Christopher who believes that he is the second coming of Jesus Christ. When the village boy oiks’ start a war with the schoolboy toffs’, Toby is caught in the middle. Can Christopher provide the miracle that Toby needs?

A brilliant evocation of school life from the master storyteller.

Michael has written more than one hundred books for children including An Eagle in the Snow, Listen to the Moon, Private Peaceful, and An Elephant in the Garden. He has won the Whitbread Award, the Smarties Award, the Circle of Gold Award, the Children’s Book Award and has been short-listed for the Carnegie Medal four times.

Former Children’s Laureate Michael Morpurgo needs no introduction. He is one of the most successful children’s authors in the country, loved by children, teachers and parents alike. Michael has written more than forty books for children including the global hit War Horse, which was made into a Hollywood film by Steven Spielberg in 2011. Several of his other stories have been adapted for screen and stage, including My Friend Walter, Why the Whales Came and Kensuke’s Kingdom.

Michael has won the Whitbread Award, the Smarties Award, the Circle of Gold Award, the Children’s Book Award and has been short-listed for the Carnegie Medal four times. He started the charity Farms for City Children in 1976 with his wife, Clare, aimed at relieving the poverty of experience many young children feel in inner city and urban areas. Michael is also a patron of over a dozen other charities.

Living in Devon, listening to Mozart and working with children have provided Michael with the ideas and incentive to write his stories. He spends half his life mucking out sheds with the children, feeding sheep or milking cows; the other half he spends dreaming up and writing stories for children. “For me, the greater part of writing is daydreaming, dreaming the dream of my story until it hatches out – the writing down of it I always find hard. But I love finishing it, then holding the book in my hand and sharing my dream with my readers.” Michael received an OBE in December 2006 for his services to literature.

Author: Michael Morpurgo
Format: eBook
Ageband: 10 to 13
Release Date: 03/10/2011
ISBN: 978-1-78031-150-0
Michael Morpurgo OBE is one of Britain's best loved writers for children, with sales of over 35 million copies. He has written over 150 books, has served as Children’s Laureate, and has won many prizes, including the Smarties Prize, the Writers Guild Award, the Whitbread Award, the Blue Peter Book Award and the Eleanor Farjeon Lifetime Achievement Award. With his wife, Clare, he is the co-founder of Farms for City Children. Michael was knighted in 2018 for services to literature and charity.

The War of Jenkins' Ear