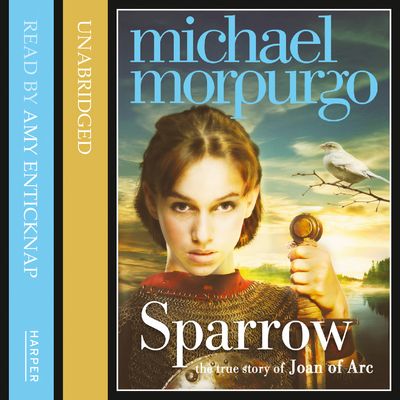 Sparrow: The Story of Joan of Arc

Eloise has always loved Joan of Arc. Noble, honest and brave, she was everything Eloise wishes to be. And on a bright sunny day in Orleans, Eloise has a very special daydream…

A superb re-imagining of Joan of Arc by master storyteller and author of War Horse.

“There was only one creature on this earth who really knew Joan. He was a sparrow, just an ordinary sparrow…He was her best friend on this earth, maybe her only friend, too.”

A young girl faces an impossible task – to save her beloved France from tyrants. To free her country, Joan will lose everyone she has ever loved. But she listens to her heart and believes in her calling.

Through patience, perseverance and unbreakable spirit, Joan of Arc leads armies to victory and finds the strength to face the cruellest of destinies.

Author: Michael Morpurgo, Read by Amy Enticknap
Format: Audio-Book
Ageband: From 9
Release Date: 28/06/2012
ISBN: 978-0-00-748874-2
Detailed Edition: Unabridged edition
Michael Morpurgo OBE is one of Britain's best-loved writers for children, and has sold more than 35 million books around the world. He has written more than 150 novels and won many prizes, including the Smarties Prize, the Whitbread Award and the Blue Peter Book Award, while several of his books have been adapted for stage and screen, including the global theatrical phenomenon War Horse. Michael was Children’s Laureate from 2003 to 2005, and founded the charity Farms for City Children with his wife, Clare. He was knighted in 2018 for services to literature and charity.

Sparrow: The Story of Joan of Arc

Eloise has always loved Joan of Arc. Noble, honest and brave, she was everything Eloise wishes to be. And on a bright sunny day in Orleans, Eloise has a very special daydream…

A superb re-imagining of Joan of Arc by master storyteller and author of War Horse.