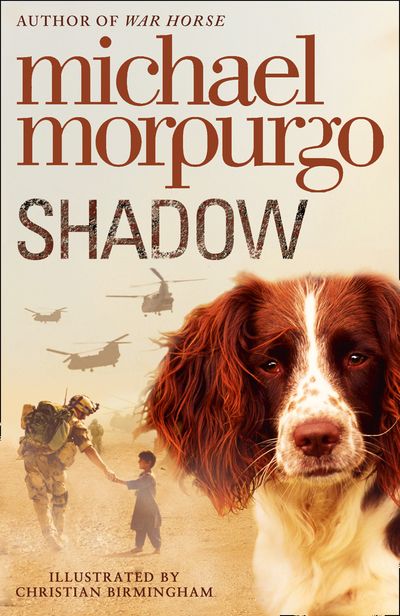 A powerful novel from Michael Morpurgo, the nation’s favourite storyteller…

Never have Aman and his mother needed a friend more than when a Springer Spaniel appears – thin and war-ravaged – in the mouth of their Afghan cave. Nursed back to health by Aman, the dog becomes a constant companion, a shadow, and that’s what Aman decides to call her.

But life in Afghanistan becomes more dangerous by the moment. Eventually, Aman, his mother and Shadow find the courage to embark upon the treacherous journey from war-torn Afghanistan to the safely of a relative’s home in Manchester, England.

But how far can Shadow lead them? And in this terrifying new world, is anywhere really safe…?

Author: Michael Morpurgo
Format: Paperback
Ageband: From 9
Release Date: 29/09/2011
Pages: 288
ISBN: 978-0-00-733961-7
Michael Morpurgo OBE is one of Britain's best-loved writers for children, and has sold more than 35 million books around the world. He has written more than 150 novels and won many prizes, including the Smarties Prize, the Whitbread Award and the Blue Peter Book Award, while several of his books have been adapted for stage and screen, including the global theatrical phenomenon War Horse. Michael was Children’s Laureate from 2003 to 2005, and founded the charity Farms for City Children with his wife, Clare. He was knighted in 2018 for services to literature and charity.

A powerful novel from Michael Morpurgo, the nation’s favourite storyteller…