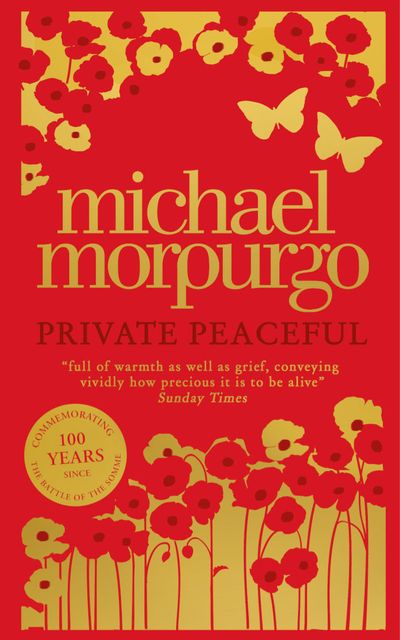 A stunning new edition of this modern classic of World War One, featuring a new introduction by the author and insightful testimonies from soldiers, to commemorate the centenary of the Battle of the Somme.

Told in the voice of Private Tommo Peaceful, the story follows twenty-four hours at the front, and captures his memories of his family and his village life – by no means as tranquil as it appeared.

Full of vivid detail and engrossing atmosphere, leading to a dramatic and moving conclusion, Private Peaceful is both a compelling love story and a deeply moving account of the First World War.

Author: Michael Morpurgo
Format: Hardback
Ageband: 9 to 12
Release Date: 02/06/2016
Pages: 208
ISBN: 978-0-00-819174-0
Detailed Edition: Anniversary edition
Michael Morpurgo OBE is one of Britain's best-loved writers for children, and has sold more than 35 million books around the world. He has written more than 150 novels and won many prizes, including the Smarties Prize, the Whitbread Award and the Blue Peter Book Award, while several of his books have been adapted for stage and screen, including the global theatrical phenomenon War Horse. Michael was Children’s Laureate from 2003 to 2005, and founded the charity Farms for City Children with his wife, Clare. He was knighted in 2018 for services to literature and charity.

A stunning new edition of this modern classic of World War One, featuring a new introduction by the author and insightful testimonies from soldiers, to commemorate the centenary of the Battle of the Somme.