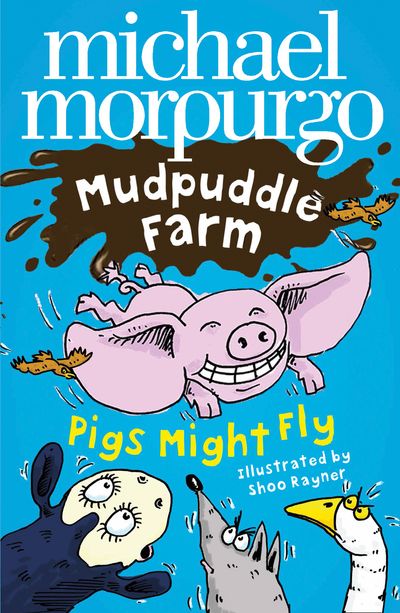 Jigger’s Day Off
“Time has come for harvest, Jigger. So I shan’t be needing you all day. It’s your day off, my dear.”

Jigger the sheepdog has just one day off a year. Just one day to chase all those little animals hiding in the corn. But even the best plans go wrong…

And Pigs Might Fly!
“Flying was not nearly as easy as it looked. Pintsize stood up on his back trotters and flapped his front ones – trotters, he thought, would do just as well as wings.”

It’s a long hot summer, and Pintsize the piglet wonders if it might be cooler in the sky. But when he tries to fly, he annoys just about everyone. It’s time he learned his lesson…

Author: Michael Morpurgo, Illustrated by Shoo Rayner
Format: Paperback
Ageband: From 5
Release Date: 29/06/2017
Pages: 144
ISBN: 978-0-00-727463-5
Michael Morpurgo OBE is one of Britain's best-loved writers for children, and has sold more than 35 million books around the world. He has written more than 150 novels and won many prizes, including the Smarties Prize, the Whitbread Award and the Blue Peter Book Award, while several of his books have been adapted for stage and screen, including the global theatrical phenomenon War Horse. Michael was Children’s Laureate from 2003 to 2005, and founded the charity Farms for City Children with his wife, Clare. He was knighted in 2018 for services to literature and charity.