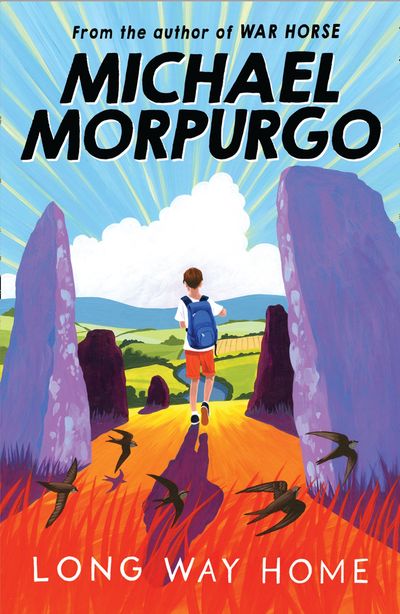 Long Way Home is a heartfelt tale of an orphaned boy in search of family from War Horse author and former Children’s Laureate, Michael Morpurgo.

Another summer. Another foster family. George has already made up his mind to run away, back to the children’s home. None of the previous families have wanted him. Why should the Dyers be any different? But George begins to feel at ease with Tom Dyer and his sister Storme, even happy, and changes his mind. He could even feel at home with them – couldn’t he?

Michael Morpurgo, demonstrates why he is considered to be the master storyteller with this book about orphans, family, love and finding a place one can call home. He has written more than one hundred books for children including An Eagle in the Snow, Listen to the Moon, Private Peaceful, and An Elephant in the Garden and won the Whitbread Award, the Smarties Award, the Circle of Gold Award, the Children’s Book Award and has been short-listed for the Carnegie Medal four times.

Author: Michael Morpurgo
Format: eBook
Ageband: From 9
Release Date: 07/05/2015
ISBN: 978-1-78031-736-6
Michael Morpurgo OBE is one of Britain's best loved writers for children, with sales of over 35 million copies. He has written over 150 books, has served as Children’s Laureate, and has won many prizes, including the Smarties Prize, the Writers Guild Award, the Whitbread Award, the Blue Peter Book Award and the Eleanor Farjeon Lifetime Achievement Award. With his wife, Clare, he is the co-founder of Farms for City Children. Michael was knighted in 2018 for services to literature and charity.

Long Way Home is a heartfelt tale of an orphaned boy in search of family from War Horse author and former Children's Laureate, Michael Morpurgo.