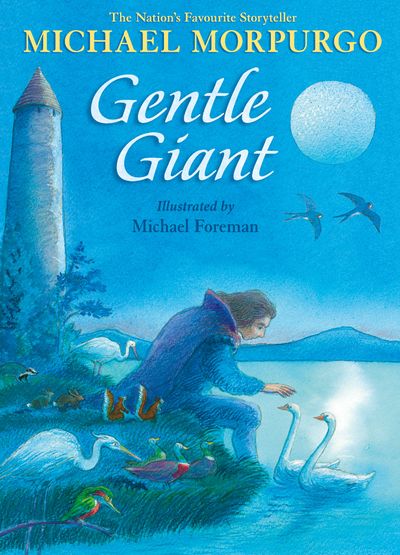 A powerful folktale about a lonely giant who lives by a beautiful lake. When he saves a girl from drowning, the giant finds the love and courage to save the lake from destruction.

On a small island way out in the middle of a silver lake there once lived a sad young man. He was sad because he had grown up into a giant of a man, very big, very strong and very frightening. Because of this, no one liked to go near him. So his only friends were the wild creatures that lived all around him.

Then one day, he saves a girl from drowning, a girl in a wide-brimmed straw hat. Little does he know how she is going to change his life forever.

Michael Morpurgo draws on traditional storytelling to weave a tale of extraordinary relevance to our own world today. A story of compassion, and love, and a simple belief in the healing powers of nature.

Author: Michael Morpurgo, Illustrated by Michael Foreman
Format: Paperback
Ageband: 4 to 7
Release Date: 29/08/2013
Pages: 32
ISBN: 978-0-00-752043-5
Michael Morpurgo OBE is one of Britain's best-loved writers for children, and has sold more than 35 million books around the world. He has written more than 150 novels and won many prizes, including the Smarties Prize, the Whitbread Award and the Blue Peter Book Award, while several of his books have been adapted for stage and screen, including the global theatrical phenomenon War Horse. Michael was Children’s Laureate from 2003 to 2005, and founded the charity Farms for City Children with his wife, Clare. He was knighted in 2018 for services to literature and charity.

A powerful folktale about a lonely giant who lives by a beautiful lake. When he saves a girl from drowning, the giant finds the love and courage to save the lake from destruction.