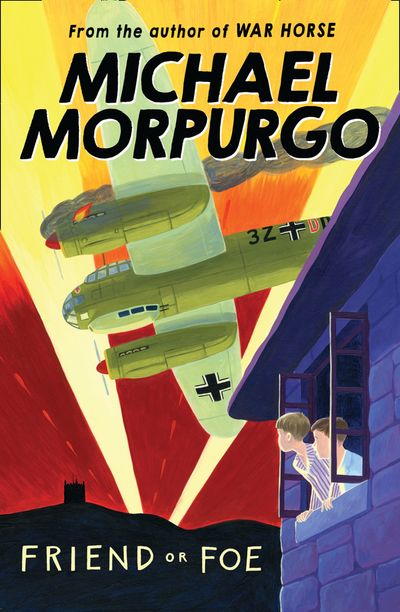 Evacuated from London, David and Tucky feel like the war is a long way away from their new life in the countryside. Then one night the skyline of the moor is lit up with gun flashes, and the distant crump of bombing miles away brings the war back to them and shatters their new-found peace. When a German bomber crashes, the boys feel they should hate the airmen inside. But one of them saves David’s life …

In the tradition of Goodnight Mr Tom, Carrie’s War, and The Boy in the Striped Pyjamas, Friend or Foe is a novel that takes children to the heart of a tumultuous period in history.

From the author of War Horse (now a major motion picture directed by Steven Spielberg) comes a stunning children’s story loved by kids, teachers and parents alike. Michael Morpurgo has written more than forty books and won the Whitbread Award, the Smarties Award, the Circle of Gold Award, the Children’s Book Award and has been shortlisted for the Carnegie Medal four times.

Author: Michael Morpurgo
Format: eBook
Ageband: 8 to 10
Release Date: 03/10/2011
ISBN: 978-1-78031-061-9
Michael Morpurgo OBE is one of Britain's best loved writers for children, with sales of over 35 million copies. He has written over 150 books, has served as Children’s Laureate, and has won many prizes, including the Smarties Prize, the Writers Guild Award, the Whitbread Award, the Blue Peter Book Award and the Eleanor Farjeon Lifetime Achievement Award. With his wife, Clare, he is the co-founder of Farms for City Children. Michael was knighted in 2018 for services to literature and charity.