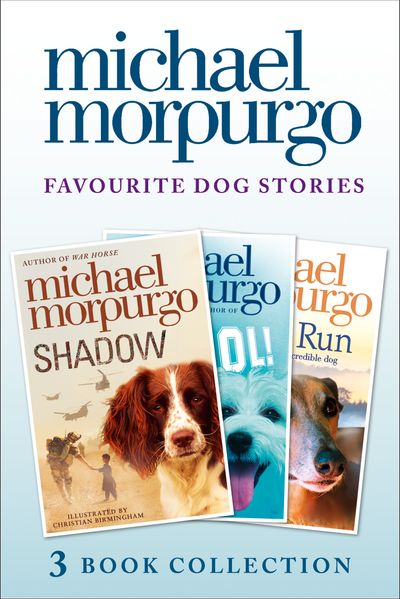 Tales from the nation’s favourite storyteller about man’s best friend who will do anything to protect their loving owners.

‘Shadow’:
Aman and his mother live in war-torn Afghanistan. When a Western dog appears at the mouth of their cave, it soon becomes Aman’s constant companion, his shadow as he calls her. But life is becoming increasingly dangerous for Aman and his family…

‘Cool!’:
Michael Morpurgo’s inspiring new story of Robbie, a boy in a coma – victim of a car accident. Locked inside his own head, able to hear but not move or speak, Robbie tries to keep himself from slipping ever deeper into unconsciousness.

‘Born to Run’:
When Patrick saves a litter of greyhound puppies from the canal, he can’t bear to hand them all over to the RSPCA. He pleads with his parents: couldn’t he just keep one of them? Patrick christens his puppy Best Mate, and that’s what he becomes. Until one day Best Mate is kidnapped by a greyhound trainer, and begins a new life as a champion race dog. Suzie, the greyhound trainer’s step-daughter, loves Best Mate on first sight and gives him a new name, Bright Eyes. But what will happen when he can’t run any more?

Author: Michael Morpurgo
Format: eBook
Ageband: 9 to 12
Release Date: 08/05/2014
ISBN: 978-0-00-759204-3
Michael Morpurgo OBE is one of Britain's best-loved writers for children, and has sold more than 35 million books around the world. He has written more than 150 novels and won many prizes, including the Smarties Prize, the Whitbread Award and the Blue Peter Book Award, while several of his books have been adapted for stage and screen, including the global theatrical phenomenon War Horse. Michael was Children’s Laureate from 2003 to 2005, and founded the charity Farms for City Children with his wife, Clare. He was knighted in 2018 for services to literature and charity.

Tales from the nation’s favourite storyteller about man’s best friend who will do anything to protect their loving owners.