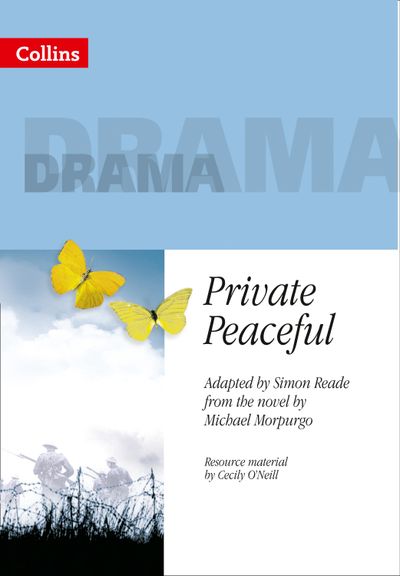 A stunning adaptation of Michael Morpurgo’s elegaic novel of the First World War.

As young Thomas Peaceful looks back over his childhood from the battlefields of the First World War, his memories are full of family life deep in the countryside.

But the clock is ticking, and every moment that Tommo spends remembering how things used to be, means another moment closer to something that will change his life forever.

Adapted for schools by Simon Reade from Michael Morpurgo’s poignant and deeply moving novel of the First World War, the play is ideal for use in the classroom and the drama studio. The extensive resource section provides many opportunities for drama, discussion, wider reading and writing.

Author: Michael Morpurgo, Adapted by Simon Reade
Format: Paperback
Ageband: 12 to 14
Release Date: 20/03/2006
Pages: 128
ISBN: 978-0-00-722486-9
Simon Reade is Artistic Director of Bristol Old Vic where he has adapted and directed a one-man touring version of Private Peaceful. His other adaptations for Bristol Old Vic include Alice’s Adventures in Wonderland (winner of the TMA Award for Best Show for Young People), Philip Pullman’s Aladdin and the Enchanted Lamp and Jill Tomlinson’s The Owl Who Was Afraid Of The Dark.He was formerly Literary Manager and Dramaturg of the Royal Shakespeare Company where his adaptations included Midnight’s Children (with Salman Rushdie and Tim Supple) and Ted Hughes’ Tales from Ovid (with Tim Supple). For the RSC he also wrote the play Epitaph for the Official Secrets Act (with Paul Greengrass) and abridged Shaw’s Back to Methuselah (with David Fielding).A former Literary Manager of London’s Gate Theatre, Simon has also worked in television drama at Tiger Aspect Productions and the BBC.

A stunning adaptation of Michael Morpurgo’s elegaic novel of the First World War.