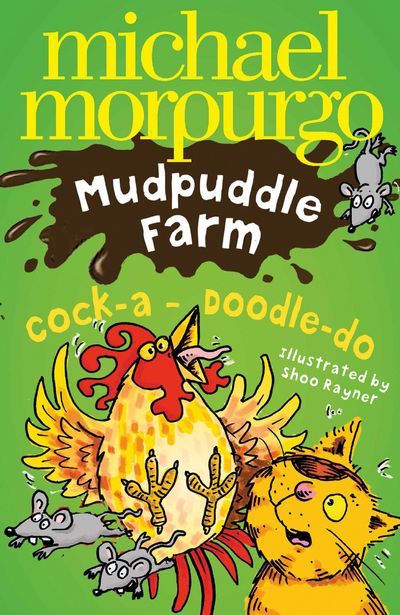 Mossop’s Last Chance:
“There’s mice in my barley sacks, there’s rats in my roof and now there’s mice in the corn bin. This time I’ve had enough. If you aren’t up to the job, you will have to go.”

Mossop the old farm cat likes to sleep – and not much else! So when Farmer Rafferty tells him to catch twenty-six mice by sunset, all the animals have to pull together to give Mossop one last chance…

Albertine, Goose Queen:
“Good morning, Madam, I’ve come to eat you. Your friends have all gone. There’s no one to help you now. They’re all very stupid, aren’t they?”

A fox is on the loose, and all the animals except Albertine the goose have hidden themselves inside. Albertine is safe on her island in the pond – at least so she thinks, until the fox starts swimming towards her…

Author: Michael Morpurgo, Illustrated by Shoo Rayner
Format: ebook
Ageband: From 5{u'range': [{u'from': u'5', u'audienceRangeQualifier': u'17'...}
Release Date: 29/06/2017
ISBN: 978-0-00-825294-6
Michael Morpurgo OBE is one of Britain's best-loved writers for children, and has sold more than 35 million books around the world. He has written more than 150 novels and won many prizes, including the Smarties Prize, the Whitbread Award and the Blue Peter Book Award, while several of his books have been adapted for stage and screen, including the global theatrical phenomenon War Horse. Michael was Children’s Laureate from 2003 to 2005, and founded the charity Farms for City Children with his wife, Clare. He was knighted in 2018 for services to literature and charity.