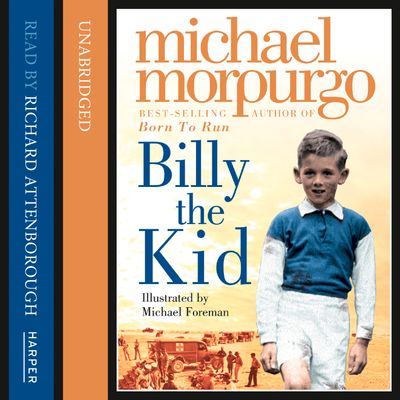 Read by the inimitable Richard Attenborough. Billy was a champion soccer star, playing for Chelsea in the 1930s. But that was before war broke out…

Billy the Kid is told through the voice of an 80 year old man, who looks back on his life as Chelsea’s champion striker until the outbreak of war in 1939 and on through his subsequent life. Billy joins Chelsea as a football apprentice, rises through the reserves to become a real champion. His passion for football sees him through the war years – even as a prisoner of war he organises a friendly against the Italians – but, having been injured by a mine he cannot play for Chelsea on his return to England. Billy turns to vagrancy and alcohol and for years he wanders up and down the country. he re-settles in London in a derelict house and is befriended by a family who move him to a shed in their garden. He, in turn, helps their son with his football who in his turn becomes a Chelsea player. Billy becomes a Chelsea Pensioner and his 80th birthday is celebrated when Chelsea play at home. A novel for both children and adults which deals with some difficult issues. Michael Morpurgo’s storytelling is superb.

Author: Michael Morpurgo, Read by Richard Attenborough
Format: Audio-Book
Ageband: 8 to 12
Release Date: 04/10/2010
ISBN: 978-0-00-742055-1
Detailed Edition: Unabridged edition
Michael Morpurgo OBE is one of Britain's best-loved writers for children, and has sold more than 35 million books around the world. He has written more than 150 novels and won many prizes, including the Smarties Prize, the Whitbread Award and the Blue Peter Book Award, while several of his books have been adapted for stage and screen, including the global theatrical phenomenon War Horse. Michael was Children’s Laureate from 2003 to 2005, and founded the charity Farms for City Children with his wife, Clare. He was knighted in 2018 for services to literature and charity.

Read by the inimitable Richard Attenborough. Billy was a champion soccer star, playing for Chelsea in the 1930s. But that was before war broke out…