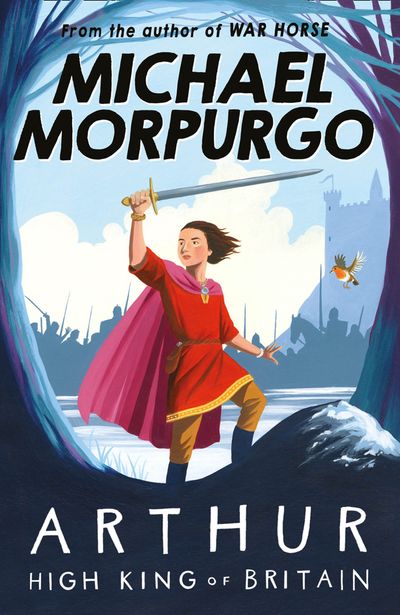 Marooned on a sandbank, a boy faces certain death. With the sea closing in and the current about to drag him to a watery grave, his final wish is to see heaven. Waking in a strange bed, the boy meets an old man sitting by the fire with his dog. It is King Arthur, the great warrior of legend, and from his lips the boy hears of Camelot, chivalry, magic, evil and betrayal.

Former Children’s Laureate and award-winning author of War Horse, Michael Morpurgo, demonstrates why he is considered to be the master storyteller with this contemporary twist on Arthurian Legend.

He started the charity Farms for City Children in 1976 with his wife, Clare, aimed at relieving the poverty of experience many young children feel in inner city and urban areas. Michael is also a patron of over a dozen other charities. Living in Devon, listening to Mozart and working with children have provided Michael with the ideas and incentive to write his stories. He spends half his life mucking out sheds with the children, feeding sheep or milking cows; the other half he spends dreaming up and writing stories for children. “For me, the greater part of writing is daydreaming, dreaming the dream of my story until it hatches out – the writing down of it I always find hard. But I love finishing it, then holding the book in my hand and sharing my dream with my readers.” Michael received an OBE in December 2006 for his services to literature.