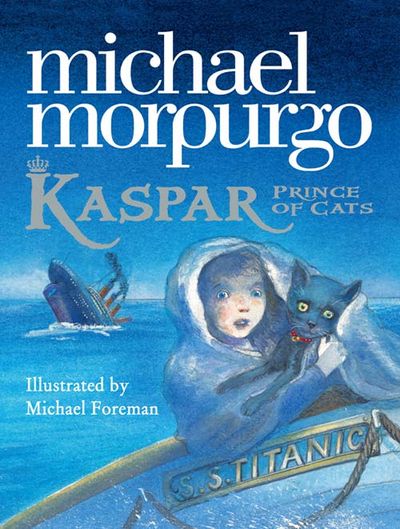 A heart-warming, colour-illustrated novel about Kaspar the Savoy cat, from the award-winning author of Born to Run and The Amazing Story of Adolphus Tips

Kaspar the cat first came to the Savoy Hotel in a basket – Johnny Trott knows, because he was the one who carried him in. Johnny was a bell-boy, you see, and he carried all of Countess Kandinsky’s things to her room.

But Johnny didn’t expect to end up with Kaspar on his hands forever, and nor did he count on making friends with Lizziebeth, a spirited American heiress. Pretty soon, events are set in motion that will take Johnny – and Kaspar – all around the world, surviving theft, shipwreck and rooftop rescues along the way. Because everything changes with a cat like Kaspar around. After all, he’s Prince Kaspar Kandinsky, Prince of Cats, a Muscovite, a Londoner and a New Yorker, and as far as anyone knows, the only cat to survive the sinking of the Titanic…

Author: Michael Morpurgo
Format: Hardback
Ageband: 8 to 10
Release Date: 01 Sep 2008
Pages: 224
ISBN: 978-0-00-726699-9
Michael Morpurgo OBE is one of Britain's best-loved writers for children, and has sold more than 35 million books around the world. He has written more than 150 novels and won many prizes, including the Smarties Prize, the Whitbread Award and the Blue Peter Book Award, while several of his books have been adapted for stage and screen, including the global theatrical phenomenon War Horse. Michael was Children’s Laureate from 2003 to 2005, and founded the charity Farms for City Children with his wife, Clare. He was knighted in 2018 for services to literature and charity.