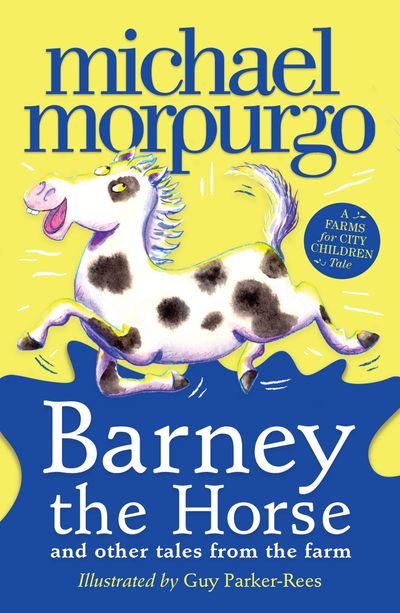 A charming story collection from Michael Morpurgo and illustrated by Guy Parker-Rees – full of friendship and adventure, and perfect to read together

Full of friendship and adventure, these three uplifting stories capture the wonder, muck and magic of a city child’s week on the farm.

Join in the daring rescue of a lost lamb, meet a boy who saves a family of swallows, and discover how Barney the horse forever changes the life of the girl who looks after him.

From Michael Morpurgo, co-founder of the charity Farms for City Children, and illustrated by Guy Parker-Rees, this charming story collection for young readers celebrates the countryside and the way its landscape and animals can leave an impression on a child’s heart forever.

Author: Michael Morpurgo
Format: Paperback
Ageband: 5 to 8
Release Date: 02 Feb 2023
Pages: 160
ISBN: 978-0-00-840868-8
Michael Morpurgo OBE is one of Britain's best-loved writers for children, and has sold more than 35 million books around the world. He has written more than 150 novels and won many prizes, including the Smarties Prize, the Whitbread Award and the Blue Peter Book Award, while several of his books have been adapted for stage and screen, including the global theatrical phenomenon War Horse. Michael was Children’s Laureate from 2003 to 2005, and founded the charity Farms for City Children with his wife, Clare. He was knighted in 2018 for services to literature and charity.