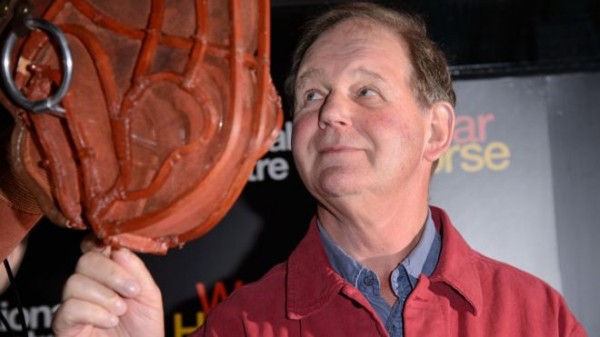 Michael Morpurgo, the celebrated author of War Horse is making a special guest appearance as a villager in the West End production at the New London Theatre on Thursday 10 December 2015 at 7.30pm. This will be followed by a post-show Q and A, which is free to everyone attending the performance.

‘I am so looking forward to joining the wonderful cast of War Horse on the 10th of December. I have over the years collected an entire costume; boots from the New York show; scarf and hat from the Canada production; jacket, waistcoat and trousers from London. So I can wait with them in the dark of the wings, hear the buzz of the audience, feel the anticipation all around me, sing the songs, be a part of it all, live the story.

Then afterwards I shall be doing a Q and A with everyone, about the journey of the story from page to stage, and stage to screen. What a journey it has been! What an iconic production it has been, what a theatre company, what a horse!’

This special event is part of a series of platforms celebrating the show and marking the show’s final performance in London on 12 March 2016. Details about an ‘And Finally’ platform on 12 March with the entire creative team will soon to be announced.

War Horse received its world premiere on 9 October 2007 at the National Theatre, where it played for two seasons before opening at the New London Theatre in March 2009. Since then it has been seen in 97 cities in 10 countries, including productions on Broadway, in Toronto and Berlin, with touring productions in the UK and Ireland, North America, the Netherlands and Belgium. Most recently a Chinese-language production opened in Beijing and is now running in Shanghai.

Find out more and book tickets at www.warhorseonstage.com or www.nationaltheatre.org.uk