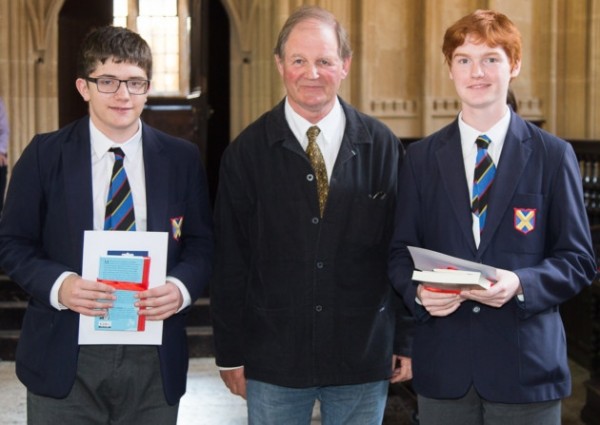 The prestigious prize was awarded to William Drake and Gustav Brincat for the second time for their adaptation of a classic German poem into a short film. The Year 10 students at St Albans School, achieved runner-up awards for their entry to this year’s theme, “Von Pop bis Poesie – Poetry and Music”.

The competition, open to all German language students aged between nine and 18, is run through the University of Oxford’s German department within the Faculty of Medieval and Modern Languages.
William and Gustav worked together to create, produce, direct and act in their own film version of Goethe’s poem, Der Zauberlehrling (The Sorcerer’s Apprentice).

Gustav was also highly commended for his entry to the ‘Networking in German’ competition, after submitting an idea for an activity that make learning German more fun.

The students and their modern foreign languages teacher, Gabriele Renz, travelled to Oxford University to collect their award, and listened to author Michael Morpurgo, guest speaker at the event.