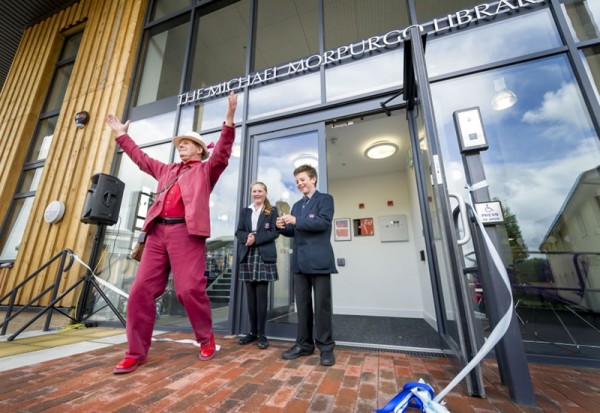 As well as opening the library, Michael presented pupils with their prizes during the awards ceremony and gave a highly entertaining talk. Michael had the audience hugely entertained with stories from his early experiences as a schoolboy scrum half, as well as a teacher, and his realisation that he could tell stories and make a career as a writer. For most people, however, they will remember his deeply moving performance of one of the songs from the stage version of his novel ‘War Horse’ which held the packed sports hall spellbound.

“I am delighted Michael was able to open our incredible new library. He is an inspiration to young people and I know a number of our pupils went home happy that one of their favourite books has been signed by the great man himself!
“We are privileged to have been able to name the library after Michael and I have no doubt in the many years to come thousands of pupils will embark on a voyage of discovery in this fantastic new facility.”

Find out more about Farms for City Children