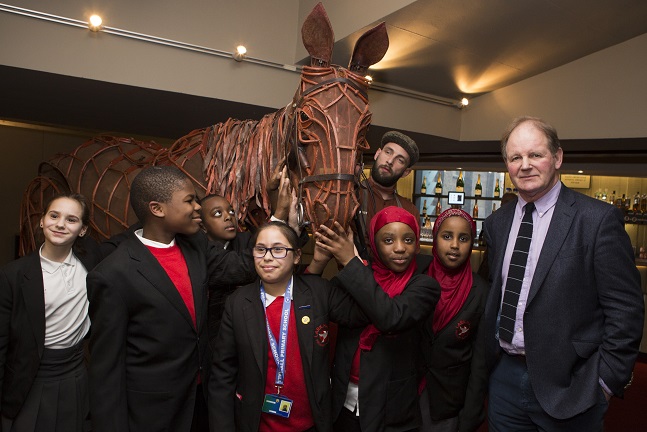 Michael Morpurgo has called Farms for City Children his greatest story and to help celebrate the work and achievements of this unique charity, Farms for City Children celebrated it’s 40th anniversary with a special gala matinee performance of the National Theatre’s award-winning War Horse on Thursday 25th February at the New London Theatre, Drury Lane.

Over 1000 children who have visited the farms were be invited to attend as guests of the friends of Farms for City Children.
and the event included celebratory drinks afterwards with Clare and Michael Morpurgo, a chance to meet Joey!

Farms for City Children opened its doors on 27th January 1976 when teacher Joy Palmer and a group of children from Chivenor Primary School in Birmingham arrived at Nethercott House, the Charity’s first farm in the north Devon village of Iddesleigh.

Today the three farms – in Devon, Gloucestershire and Pembrokeshire welcome over 3,250 children and 400 teachers a year. Over the 40 years, nearly 100,000 children have experienced the ‘muck and magic’ that is the hallmark of Farms for City Children. Ted Hughes, then Poet Laureate and close Devon neighbour to Nethercott, became the Charity’s founding President, and HRH, The Princess Royal is its Patron.

For many urban children this opportunity to live close to nature is something that stays with them forever. The experience can be life-changing, giving children in their formative years the chance to encounter something totally positive, challenging and rewarding. Children learn social and emotional development through teamwork, self-worth through rewarding work and completion of tasks, and about the importance of healthy eating and where their food comes from.

Michael Morpurgo comments on the anniversary, ‘All those years ago Clare and I arrived in Devon and with the money left to her by her father Allen Lane we bought a farm and rather idealistically set up a charity. Working with the teachers and with the neighbouring farmers, we pioneered a programme of work designed to extend children in every way possible out on the farm – physically, mentally, emotionally and intellectually. It is hard work, real work, and the children know their work is essential and important, that it matters to the animals, to the farm, that it simply matters. They matter.”

Click here for more information on Farms for City Children.

Michael and Clare Morpurgo getting Joey to rear up for the children.

Children from Lark Hall Primary meeting Michael Morpurgo and Joey, from War Horse after the show.