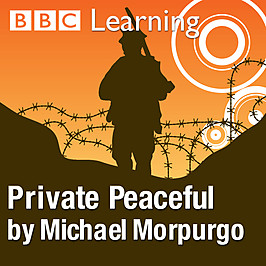 A new abridgement of Michael Morpurgo’s moving World War 1 story Private Peaceful is to be broadcast by BBC School Radio in 13 episodes.

During the passing hours of an all-night vigil Private Thomas Peaceful recalls the events of his young life his school days, family life in a tied cottage on a country estate, love for a girl called Molly. Later, he recalls how he and his elder brother, Charlie, enlist and are posted to France, the hardship of life in the trenches and the terrible event that the morning will bring.

The first episode will be broadcast at 3.45 on Friday 17 January. Private Thomas Peaceful (Tommo), begins the recollection of his short life to date. He remembers his school days – shared with his elder brother, Charlie, and their friend, Molly – and the circumstances of his father’s death, for which he blames himself.