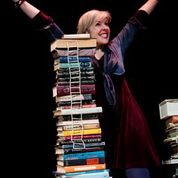 I Believe in Unicorns Spring Tour

Following a hugely successful run at the 2013 Edinburgh Fringe Festival and a sell-out tour of libraries in Hertfordshire and Central Bedfordshire as part of the Family Arts Festival last year, I Believe in Unicorns started its UK Spring Tour this week.

This 55 minute version has been created by Dani Parr, Associate Director of Royal & Derngate Northampton and winner of two Awards for Innovation at this year’s Brighton Festival and producer and performer Danyah Miller.

Wizard Presents’ intimate, storytelling-led version of Morpurgo’s tale of the power of books, set in times of war and peace, includes an interactive book swap at each performance. The audience is encouraged to contribute to and influence the story and is invited to bring an unwanted favourite children’s book to form part of the set. There is an opportunity to swap it for another at the end of the performance.

If ever a story highlighted the importance of libraries in our communities, this is it. Discover the power of stories to transform lives as Tomas becomes instrumental in saving his burning library; when in the midst of war his village is overrun by soldiers.

“Breathtakingly beautiful and utterly charming…a must see” Primary Times
“An utterly magical stage adaptation of Michael Morpurgo’s enthralling children’s tale” The Stage
Up to date tour and booking details can be found at www.ibelieveinunicorns.co.uk